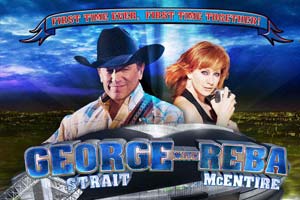 Can I just say my husband is awesome? Our 9 year anniversary is next month but with everything we have going on we might not have time to celebrate it, so my husband surprised me on Saturday with an anniversary date. I was so surprised, he got a babysitter and set it all up and I had no idea. At first I was a little annoyed he didn’t tell me, after all my house was a mess! LOL, we had dinner and then went driving towards downtown for a “carriage ride” he said. When we got there, he handed me a card, it was actually concert tickets to my most favorite singer ever!! George Strait! Okay, so I am huge fan!!! Plus, the show also included Reba and she is great too. I was so excited as we parked and walked to the event center. We got inside and walked down to our seats…they were so close to the stage! I got to be like 15 feet away from King George! They didn’t let me take my camera in so I don’t have any good pics, just a few blurry blown out phone pics. 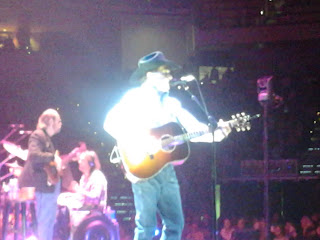 Oh well…at least its a night I will never forget. I have only attended 2 George concerts…but I hope that he’ll keep touring so I can attend more. It was so amazing and I am even more impressed that my dh put so much thought into this. Especially because I know he would have rather spent the money somewhere else but he did it all for me. He “gets” me. The show was fantastic, minus the wasted middle age woman sitting near us. Of course she was pretty amusing to watch, even when she fell down the stairs…I know, I shouldn’t have laughed, but if your going to get that trashed in public you should probably expect to get laughed at it. And she even got up and laughed 🙂 Even the next day we woke up and laughed at the hangover she was going to have. 🙂  The best anniversary EVER!